Can someone please tell me where the hell November has gone!? This weekend marks the official start to Christmas (for me anyway ha) and I could not be more excited! I am such a massive Christmas fan the whole period from October – December I love anyway and as soon as those Christmas lights go up I am all ready to hanker down, live under the duvet and only drink warming alcoholic beverages – anyone else with me?

November always feels like a super long month, I wonder if that is because we are all waiting for the Christmas season to begin!

As usual I want to round up the month with some of these lovely restaurants I enjoyed during November and hopefully inspire some of you to give them a try!

‘Cross Lanes Organic Farm is a family business with an award winning farm shop and organic restaurant which supports local producers. In the farm shop we have an in house butchers, delicatessen, bakery, general store and craft section. Cross Lanes is run and built entirely on eco principles with organic, local and green thinking at the heart of everything we do. We have a children’s play area outside, we have ‘sheep on the roof’, geese and ducks wandering around and pigs in the fields!’

The cafe is really lovely and just down the road from my boyfriends family and I have been a few times! Everything they serve is organic and from local producers which I really rate.

Sooo so so yummy. Others ate the Pork roast with perfect crackling and burgersss!

My housemate and I went here one evening before watching a brass band play songs from Harry Potter (wow I love London)! I had never been before but I really would go again. I could have eaten everything on the menu it all sounded delicious.

Really tasty! The chicken was really juicy not dry at all and the slaw and fries were yumm!

My housemate went for:

And it did look mighty fine!

Service was a teeny bit slow considering it was quite empty and they did forget to bring us something we had ordered – however, when we told our waiter what he had forgotten he was SO apologetic and offered us both a tea/coffee on the house which was really sweet and completely unnecessary and I left knowing 100% I’d go there again. Our waiter, when splitting the bill, also didn’t charge us the service charge because of his mistake which was also sweet, however of course we tipped him – we all make mistakes and he had more than made up for it!!

We went here for dinner with some close friends of ours as we all absolutely love thai food and this place has been recommended to us by so many people. All the food looked great and the staff were really friendly. It also had a really nice atmosphere.

We went for the sharing board to start – chicken satay, vegetable spring rolls, crispy chicken wings, a chef’s special and my absolute fave, prawn crackers!!

For mains, I went for the Red Thai Curry with Duck, as I was feeling rather fancy! 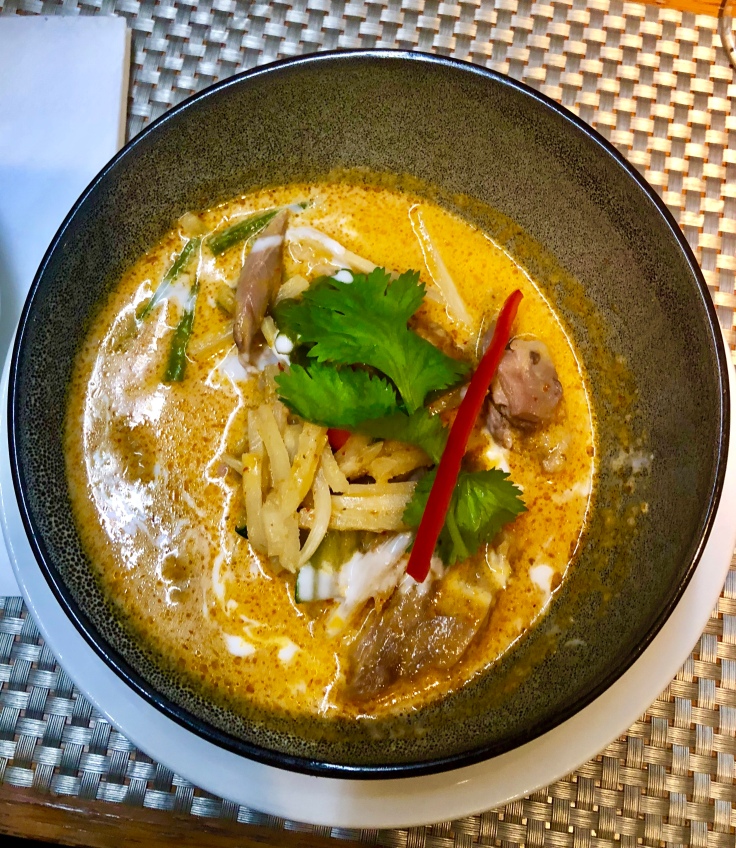 Everyone really enjoyed their meals and I would definitely go again.

As chains go, this is definitely one of my favourite. I went so much when I was younger that I had to have a break but now I go less often I really enjoy it when I’m there. It’s just great food, great prices and a great atmosphere. My boyfriend and sister went for dinner the other week and then about three days later we were looking for somewhere to have lunch with the boyfriends family and he suggested Wagamama again!! At least I had the opportunity to eat two different items on the menu!

In the evening I went for the Yasai Katsu Curry! Their Katsu is what Wagamama is known for – everyone loves the katsu, it must be one of their most popular items. The original version is served with chicken, however I fancied something slightly lighter so I went for the veggie version which is butternut squash, sweet potato and aubergine. YUMMM YUM. The secret as to why this is the best dish lies actually in the salad which has the most delicious dressing on it, a recipe which cannot be found anywhere!

The second time I went that week being for lunch, I chose the Teriyaki Soba with Salmon – a little lighter than a curry its a noodle dish and really yummy. The salmon is perfect and it is just spicy enough!

One Friday night we’d had a few to drink and was in desperate need of some food as we were all starving! Having initially been on the look out for chicken we walked straight past Shake Shack and to a chicken wing place (who shall remain nameless) where having been stood in a queue for over 20 minutes, were then told the food could take up to another 20 minutes to be ready..!!!?? I was not happy so we left and walked to the wonderful, not super busy, Shake Shack. And boy, am I glad that happened. First off we had queued, ordered, paid and received our food in under 10 minutes (good start) and then secondly, when the food came it was not only a fantastic portion size but seriously gooooddd!!!!

I went for the Crispy Pickle Burger (picture below), which I am sad to say was a limited edition and I think it may no longer be on the menu now! However, my friends both had different burgers and were incredibly satisfied! We shared 2 portions of crinkly fries between us, which was the perfect amount. The fries, from the pictures don’t seem like they would be too crispy but they most certainly were!

Also p.s. cheesy fries are on the menu !!

I also ate in Blixen (again) and The Real Greek (again!) – see my review for both here.

I hope this inspires some of you to give these a try or just to treat yourself to a cracking meal out!

Here’s to a fantabulous December guys!