Up until a few months ago, Greenwich market was just a 15 minute walk away under the famous foot tunnel and I would often go there for lunch on the weekend if I had no other plans. Unfortunately I have now moved further central so its not a walk a way any more! If you haven’t been there is so much to choose from and every type of cuisine you could want. One particular day, I had the day off work to pack my entire flat into boxes and wandered over for some food. At the time there was a really tasty greek stand and I got a chicken box.

Loving it SO much, I decided to try and recreate it for our packed lunches. This is something I always endeavour to do… If I buy something and enjoy it I try and work out a way to recreate it and make it from home!

Here is how you can too! – There is a lot to this recipe but stick with it because it is worth it!!

Heat the oven to 180 degrees Celsius.

Take the chicken breasts, put into a bowl and add the mixed herbs, one glove of garlic (grated), salt, pepper and one tablespoon of olive oil. Mix to make sure everything is combined, cover and put in the fridge for at least an hour.

Take the grated carrot, put in a bowl and pour over enough about 3 tablespoons of malt vinegar. Toss the carrot, cover and put in the fridge for at least an hour.

Take the red cabbage, put in a bowl and pour over enough about 3 tablespoons of malt vinegar. Toss the cabbage, cover and put in the fridge for at least an hour.

Add the aubergine and peppers to a baking tray, drizzle with olive oil and season with salt and pepper and put in the over for 30 minutes.

After the chicken has been marinated for a least an hour take it out of the fridge and put on a baking tray and cook in the oven for 20-30 minutes. You want the chicken to be cooked through (obviously!) but not over cooked so it does not become dry.

In a bowl, mix the greek yoghurt with the lemon juice and zest, 2 garlic cloves (grated) and a handful of chopped mint. (Add more garlic if desired!)

When everything is cool –  it is time to pile up!!

In a Tupperware box, lay slices of iceberg lettuce. On top add some roasted veggies, a few pieces of chicken, a handful of cabbage, a handful of carrot, some chopped cherry tomatoes, chopped cucumber and a dollop of yogurt. Sprinkle over some sesame seeds and enjoy!! 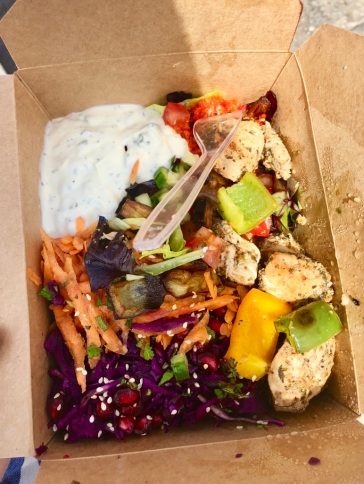 Not a bad comparison!! Let me know what you think. Do any of you try and recreate your favourite meals?!