My sister is at university and incredibly hard to get hold off or nail down a date to see me. So you can imagine I was feeling pretty excited when she invited me to spend a voucher she had AND selected the date AND organised the whole thing.

She was given a three course meal and complimentary cocktail from Gilgamesh in Camden from her friends for her 21st. However, we were pretty disappointed when we saw that they were closed indefinitely for refurbishment – something that should have been pointed out on the voucher! However, we were able to redeem the voucher in one of its sister restaurants Gabeto or Shaka Zula. Not knowing what to expect from either but having heard from a friend that Shaka Zulu was not fantastic we chose Gabeto as Spanish/mexican type food is our thang. 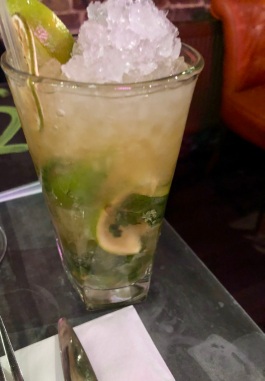 We were apprehensive to say the least as the reviews for this place seem incredibly mixed and some were seriously poor. But we thought hey it’s free food and we can always have a few drinks after and forget about it if its tragic!

We were pleasantly surprised! Perhaps the key to all experiences is read all the terrible reviews – that way it can only be the same or better !!!

The complimentary cocktail was a choice of a Bellini or a Mojito – I went for Mojito and Lily a Bellini and must say it was a fineee Mojito!

We were limited to three choices of starter, four mains and three desserts – but there was more than enough variety to satisfy us. This is because we had the voucher so our limited choice is not reflective of the whole menu!

Lily went for the salt beef with garlic aioli and sourdough.

I chose the mushroom with goats cheese and roasted peppers.

Both were great! I expected mine to come as a stuffed mushroom, but in fact it was on a sort of tortilla all chopped up together it really was good.

Lily went for the burger – included cheese, bacon, chipotle sauce – with fries – she ate every scrap, the burger itself was moist and a decent size.

I chose the lamb which came with tenderstem broccoli and pesto mash (and I added some fries and chipotle mayo!). The lamb was really well cooked it was tender and crispy on the outside where it had been grilled and there was the perfect amount of crispy fat! The fries were totally perfect and just how I like them. The only disappointing part was the mash and broccoli was a little cold… 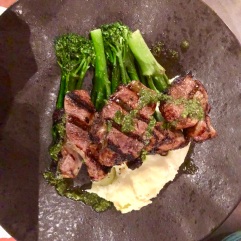 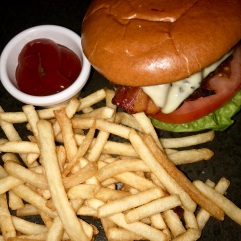 We shared the chocolate and pistachio brownie with ice cream and the churros with chocolate sauce. Both were delivered warm and both really yum! We were stuffed by this point though! 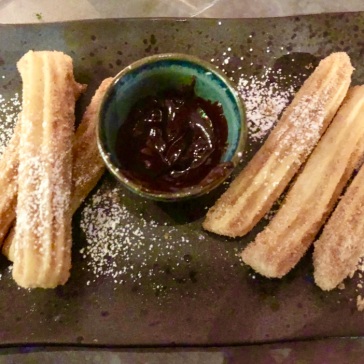 Monday – Friday till 7.30pm they do a selection of cocktails for £6 so we took advantage of this and had another cocktail each. The selection was really good and not limited to the usual four choices you get on a happy hour menu!

The service was really good and the staff were really friendly. Some of the reviews we read before said the service was terrible. We were lucky because our table was at 6.30 pm so it wasn’t too busy so we did get a lot of attention however as the place filled up the service did get slower and you could see they were struggling. If you were in a hurry I wouldn’t recommend it unless it was early.

The food was simple and not the best food I’ve ever eaten but it was tasty and the atmosphere and music was really good. I’m not sure I would be desperate to go back but if I was invited there I wouldn’t turn it down! The place was really busy by the time we left about 8.30 pm which is a good sign!